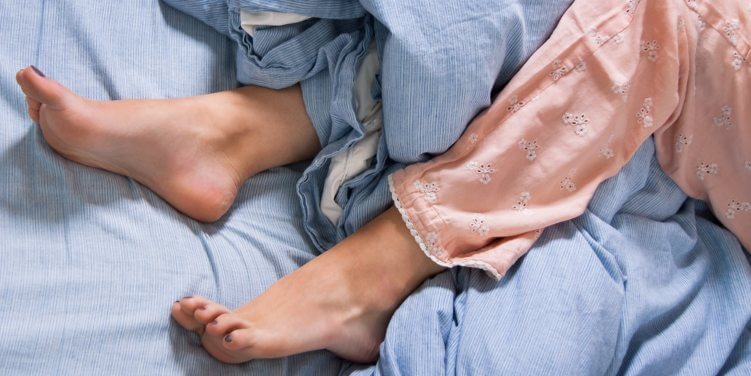 Restless legs syndrome (RLS) is a condition that causes an (almost) irresistible urge to move the legs. It is also known as Willis-Ekbom Disease.

It is a neurological disorder, and in most cases, there is no cure for it.

However, current therapies — which include lifestyle changes and certain medications — can control the disorder, minimise symptoms and thus can significantly improve RLS patients’ quality of life.

Restless legs syndrome is also considered a sleep disorder because it usually gets worse close to bedtime and disrupts sleep [1, 2].

Everyone at every age can develop RLS, but, it is more common in middle-aged and elderly people [3, 4].

Women are about twice as likely to develop Restless Legs Syndrome as men [5, 6, 7].

According to the National Institute of Neurological Disorders and Stroke; up to 10 per cent of the United States population may have restless legs syndrome.

People with RLS typically describe their symptoms as unpleasant sensations in their legs or feet, which creates an irresistible urge to move the legs.

Although many RLS patients have difficulty describing the unpleasant sensations that occur in their legs, the sensations are commonly described as crawling, gnawing, pulling, itching, throbbing, or pins, electric and needles [3, 8].

Walking, stretching or shaking the legs ease the sensations temporarily. However, in some severe cases, moving the legs may not relieve the uncomfortable sensation [9].

Resisting the urge to move the legs usually worsen the symptoms and may even cause the legs to jerk involuntarily [10].

RLS symptoms typically happen in the evening and nighttime hours, especially when the affected person is sitting, lying down or attempting to sleep.

Moreover, sitting for an extended period of time such as in a car, plane or theatre can trigger the symptoms.

The unpleasant sensations may sometimes occur in the arms, and rarely in the chest, head or other parts of the body [3, 12].

The severity and frequency of the RLS symptoms vary from person to person. In other words, each person with RLS is not affected to the same degree.

In some cases, RLS symptoms may disappear for a period of days, weeks, months or even years. This is called the remission period. However, almost always the symptoms will return [2, 8].

As mentioned above; since RLS can disrupt the affected people’s sleep severely, it is also considered a sleep disorder.

Many people with RLS have difficulty falling and/or staying asleep due to the uncomfortable sensations in their legs and the strong urge to move them.

In general, the strong urge to move the legs disappears in the early morning, around 4 am.

According to the National Institute of Neurological Disorders and Stroke; more than 80 per cent of people with RLS also experience periodic limb movement of sleep (PLMS), a condition in which a person’s legs (sometimes arms) move repetitively and involuntarily for about 20 to 40 seconds during sleep. In contrast to it, most PLMS patients do not have RLS [2, 3].

In most cases, researchers do not know what causes restless legs syndrome. This is called primary (or idiopathic) RLS. They have only theories.

In other cases, RLS is caused by an underlying condition, such as kidney failure, iron deficiency or pregnancy. This is called secondary RLS. When the underlying cause is addressed, the uncomfortable symptoms that induce the strong urge to move the legs may go away.

Genes: Studies found that about 50 per cent of people with restless legs syndrome have a close family member who also has RLS [14, 15].

Researchers identified various gene variants associated with RLS. And, if the symptoms start before 40, it is usually thought that RLS runs in the family [16, 17].

Imbalance of the Brain Chemical Dopamine: Evidence suggests that RLS may be linked to disruption in the dopamine pathways in the brain [2, 18, 19].

Dopamine plays a crucial role in creating muscle activity. According to researchers, constant disruption of the dopamine pathways in the brain may result in involuntary muscle movements associated with restless legs syndrome.

Pregnancy: According to the statistics; up to 35% of pregnant women develop restless leg syndrome for the first time, particularly during the third trimester [22, 23, 24]. Though, symptoms usually go away within weeks of delivery.

Besides, pregnancy may worsen the existing symptoms of restless legs syndrome!

Iron deficiency: Another potential cause of RLS is the low level of iron in the blood. According to NHS; iron deficiency can cause a fall in dopamine, thus triggering RLS symptoms.

Kidney failure: This is also related to iron deficiency. Because when kidneys don’t function properly due to kidney failure, iron levels in the blood can decrease, which in turn, may cause or worsen RLS [28, 29].

Medications: Some medications — such as antidepressants that increase serotonin, some allergy and cold drugs and anti-nausea drugs — can contribute to the development of RLS [1, 2].

Spinal Cord Conditions: According to Mayo Clinic; lesions on the spinal cord or having had anaesthesia to the spinal cord, such as a spinal block, also increase the risk of developing RLS.

Certain Substances: The use of caffeine, nicotine or alcohol — although they do not directly cause RLS — may trigger or aggravate RLS symptoms [30, 31].

It is recommended to see a neurologist for the diagnosis of restless legs syndrome.

There is no specific test for RLS. Therefore, the diagnosis will be made by a doctor based on the patient’s symptoms, medical and family history, a physical examination, and some test results.

Note: Diagnosing RLS in children tends to be more difficult as it is harder for children to describe the symptoms and features of symptoms.

If RLS is caused by an underlying condition such as iron deficiency, peripheral neuropathy or pregnancy, treating these conditions (or giving birth) can significantly improve the symptoms or completely solve the problem.

However, most RLS cases are primary or idiopathic — meaning the reason is unknown  — and there is no cure for it.

That said, lifestyle changes and certain prescription medications can significantly reduce the restlessness in the legs ( even if it is primary RLS ), thus increasing the patient’s quality of life considerably.

Whether an RLS patient needs to use medication should be determined by a doctor ( if possible a neurologist who specialises in treating restless legs syndrome ).

Some lifestyle changes may ease the symptoms of restless legs syndrome:

If lifestyle changes are not enough to reduce the restlessness in the legs, your healthcare provider may prescribe certain drugs, which might include:

Drugs — taken regularly to relieve RLS symptoms — may become less effective over time or even aggravate the symptoms. So, changing medications might be necessary.

Moreover, many of the drugs that are used to relieve RLF symptoms have certain side effects; therefore, they should be used under a supervision of a doctor!

Note that many drugs used in the treatment of RLS aren’t recommended during pregnancy.

In most cases, restless legs syndrome is a lifelong condition. For this reason, patients with RLS should develop some coping methods to manage the situation.

The first step to effectively dealing with this condition is to work with a doctor who specialises in treating restless legs syndrome.

However, some people with RLS never seek medical attention because they fear they will not be taken seriously.

Untreated RLS can severely affect the quality and amount of sleep and thus lead to exhaustion and daytime sleepiness. These, in turn, can create problems in school, work or personal relationships.

Several studies prove that the prevalence of depression in people with restless legs syndrome is high [31, 32, 33].

So, if you think you have restless legs syndrome, we heavily recommend you work with your doctor/neurologist.