Pistachios May Promote Better Sleep! Here is how… 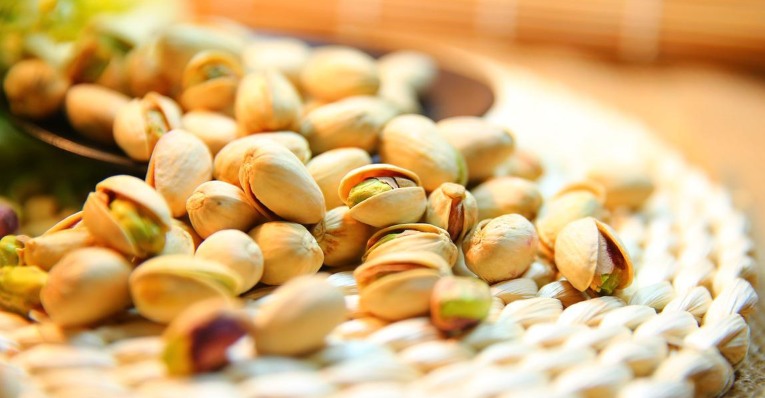 Many foods and drinks are associated with better sleep. In recent years, however, pistachios seem to stand out amongst others.

This is because studies performed in the last decade have found that pistachios contain relatively high levels of dietary melatonin, much higher than most fruits, cereals and seeds.

Briefly, melatonin is a hormone that tells your brain when it is time to go to sleep, among its other functions in the human body.

While it is produced naturally in the body, consuming melatonin-containing foods can also increase the concentration of this hormone in the blood and thus may contribute to good sleep.

In addition to melatonin; pistachios contain many other sleep-promoting compounds, such as vitamin B6, tryptophan and calcium.

Let’s take a closer look at the potential effects of pistachios on sleep.

Table of Contents show
1) Diet and Sleep
2) Pistachios and Sleep
3) Sleep-Promoting Nutrients in Pistachios
3.1) How Does Melatonin Affect Sleep?
3.2) Melatonin Content of Pistachios
4) How Many Pistachios For Sleep?
5) Other Foods That May Help Sleep
6) The Bottom Line

People who regularly get poor sleep try different strategies to improve their slumber. One particular strategy commonly used to get a good night’s sleep is to consume certain foods before going to bed.

However, science approaches the idea to consume particular foods to overcome sleep problems very cautiously given the fact that both diet and sleep are very complex.

Sleep is known to be affected by many factors including; genetics, underlying diseases, stress and ageing. As for diet, people react differently to the same food.

So, scientifically, there cannot be a single food that can resolve slumber challenges in all affected individuals.

That said, science does not rule out the possibility that the consumption of certain foods and beverages might contribute to good sleep by providing the body with sleep-promoting compounds.

A recent review of studies has found that foods that contain particular compounds such as tryptophan, melatonin, and phytonutrients have the potential to improve sleep quality and quantity.

This section of the article tells us that certain foods and drinks, such as pistachios, could potentially contribute to sleep, but can’t guarantee a good night’s sleep.

Keeping this in mind, we can proceed and explain in detail how consuming pistachios at night may help improve sleep.

To the best of our knowledge, no study with human or animal subjects has looked at the effects of pistachio consumption on sleep. In other words, pistachios’ effects on sleep haven’t been tested in scientific studies.

So what makes pistachio nuts highly associated with better sleep?

The answer was provided at the beginning of the article: pistachios contain several components that are known to aid sleep, mainly melatonin!

Let’s find out the sleep-inducing nutrients in pistachios and explain how they may influence sleep. This will in turn tell us why eating pistachios at night might be a good idea for those who wish to get a good night’s sleep.

The main reason pistachios are touted as a sleep aid is because they are (said to be) high in dietary melatonin. In this section, we’ll take a closer look at the melatonin content of pistachios and explain how this may contribute to sleep.

Before that, however, let’s briefly touch on other sleep-promoting nutrients found in decent amounts in pistachios.

Tryptophan is an essential amino acid, meaning the body can’t produce it, therefore, has to be taken through the diet. As for its role in sleep: tryptophan is needed to produce serotonin, a chemical that the brain uses to produce melatonin. A 2014 study showed that increasing tryptophan intake can in turn increase melatonin production in the body, contributing to better sleep. The good news: pistachios — like many nuts — are a good source of tryptophan.

Calcium is known to help the brain to use tryptophan to produce melatonin. According to the USDA; 100 gm of pistachios contain 107 mg of calcium. For most adults, it’s recommended to consume between 500 to 1200 mg of calcium per day.

Magnesium may help with sleep in two ways: It can help reduce inflammation and help reduce the cortisol levels (stress hormone) in the body. A study found that an adequate intake of magnesium may improve sleep quality, especially in older adults with insomnia. Pistachios are a good source of magnesium.

Vitamin B6 helps the body to produce neurotransmitters such as serotonin and melatonin, both of which are vital for good sleep. So, no surprise, vitamin B6 deficiency has been correlated with insomnia symptoms. One cup of pistachios contains about 0.65 mg of vitamin B6, according to the U.S Department of Agriculture. This equals almost half of an adult’s daily vitamin B6 needs.

How Does Melatonin Affect Sleep?

Melatonin is a hormone produced by the pineal gland in the brain. Its main function is to regulate the sleep-wake cycle.

Melatonin levels typically start rising in the evening to prepare the brain and body for sleep. It stays elevated overnight and thus helps maintain sleep. In the morning (as the sun rises) melatonin levels begin to drop, signalling the brain to wake up.

Research has found that consuming foods that contain dietary melatonin can increase the level of this hormone in the blood and thus may promote healthy sleep.

This, in fact, lays the foundation of the belief that melatonin-containing foods (such as pistachios, almonds, fish and tart cherries) may improve sleep.

How much melatonin is available in pistachios?

These variables may explain why the studies that have evaluated the melatonin content of pistachios have yielded different results.

A study carried out in 2014 by Iranian researchers found that 100 gm of shelled pistachios contain about 23 gm of melatonin, which is higher than most melatonin supplements. However, some researchers expressed their concern about the method used in this study to measure the melatonin levels.

Another study performed at Louisiana State University in 2019 found that American pistachios contain 660 nanograms of melatonin per gram. This amount of melatonin is much higher than many fruits, vegetables, seeds and plants, according to the study authors.

An analysis, carried out by researchers at the University of Milan, found that pistachios contain more dietary melatonin than almonds, which are also known to be high in melatonin.

So, it is almost impossible to know exactly how much melatonin is present in your pistachio nut because it depends on many things, such as where it was produced and in what conditions it was grown.

However, sleep experts and available studies on this topic indicate that pistachios are high in melatonin compared to many other foods and therefore may aid sleep.

How Many Pistachios For Sleep?

There is no definite answer to this question as well because researchers haven’t tested the effects of pistachios on sleep! That said, try eating a handful of pistachios as an after-dinner snack to see if it helps improve your ability to fall and stay asleep.

Please note that more than that amount may cause your body to work on digestion, which normally slows down when you are sleeping, and thus may disrupt your sleep.

Briefly stated, avoid eating too many pistachios at night to reap the benefits.

Other Foods That May Help Sleep

Sleeplessness, aka insomnia, is becoming increasingly common around the world. In the U.S alone, insomnia symptoms affect 30 to 50% of the adult population.

So it is natural that people want to take advantage of healthy foods to hit the hay.

While there is no study pertaining to the effects of pistachios on sleep, their nutrient profiles indicate that pistachios may improve sleep.

Give a chance to nutritious pistachios and see how these delicious nuts affect your sleep.

In addition to aiding sleep; pistachios may help lower blood pressure and help keep your blood sugar and cholesterol levels in check.

We use cookies to ensure that we give you the best experience on our website. If you continue to use this site we will assume that you are happy with it.OkNo