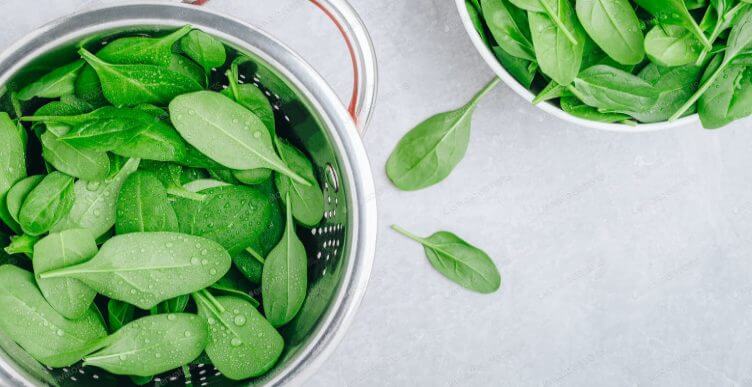 Is it possible that spinach — which is loaded with essential nutrients and antioxidants — may cause you to develop harmful blood clots?

In this article, we will provide a thorough, clear, and science-based answer to this question.

However, if you don’t have time to read the whole article, here is an immediate answer for you.

Table of Contents show
1) The Immediate Answer
2) How May Spinach Cause Blood Clots?
3) Blood Thinners and Vitamin K
4) How Much Vitamin K is in Spinach?
5) Should You Eat Spinach If You Use Warfarin?
6) Conclusion

If you are a healthy person who is not taking the blood-thinning medication, warfarin, then you shouldn’t worry about developing blood clots related to your spinach consumption. Spinach doesn’t increase the risk of blood clots in the average person.

However, if you are using warfarin, (or another blood-thinning medication) then yes; you should be careful about how much spinach you consume! Increasing your intake of leafy greens, including spinach, which are high in vitamin K, may reduce the effectiveness of the medication and thus may increase your risk of developing blood clots.

It appears that this answer requires a clearer explanation!

In the rest of the article, we’ll thoroughly explain why eating spinach may increase the risk of forming blood clots in those taking warfarin.

How May Spinach Cause Blood Clots?

The reason spinach is associated with blood clots is that spinach has a very high vitamin K content [1, 2, 3].

It is important to note that vitamin K — even in excess amounts — doesn’t lead to harmful blood clots in healthy individuals [6, 7].

However, if you use a blood-thinning medication that interacts with vitamin K, such as warfarin, you should be careful about how much vitamin K you eat.

Consuming more vitamin K than you normally do may prevent warfarin from effectively thinning your blood and increase the risk of blood clots.

On the other hand, if you don’t eat an adequate amount of vitamin K in your diet when taking warfarin, you can increase your risk of bleeding, says the Mayo Clinic.

For these reasons, people who are on warfarin are advised to be consistent in how much vitamin K they consume in their diets [3, 8].

Since spinach is loaded with vitamin K, this healthy green vegetable may cause you to exceed your daily average consumption of vitamin K, which in turn may reduce the effectiveness of the blood-thinning medicine you use.

Warfarin — which is sold under the brand name Coumadin — is the most common anticoagulant medication (blood thinner) that interacts with vitamin K.

That is to say, the effectiveness of warfarin can change according to the amount of vitamin K consumed [9, 10, 11].

The American Heart Association (AHA) suggests that eating an increased number of foods high in vitamin K can lower the effectiveness of warfarin, thus, potentially increasing the risk of blood clots.

However, not all anticoagulants (blood thinners) interact with vitamin K. That means, there are anticoagulants that aren’t influenced by the amount of vitamin K in the body [12].

Ask your health care provider whether the anticoagulant you use interacts with vitamin K.

If it doesn’t, you don’t need to worry about how much spinach or other foods high in vitamin K you consume in your diet.

How Much Vitamin K is in Spinach?

As per HealthlinkBC; a half cup of (125 ml) cooked spinach contains almost 470 mcg of vitamin K.

Bear in mind that cooked spinach contains almost 3 times more vitamin K than raw spinach, simply because the cooking process reduces the volume of raw spinach, allowing a lot more of the veggie to be packed into the same amount of space [13, 14].

According to the National Institutes of Health, adults should consume about 90-120 mcg of vitamin K per day.

It appears that a half cup of cooked spinach provides way more vitamin K (470 mcg) than an average person needs (90-120 mcg) in a day.

Important to note that other leafy green vegetables such as kale, broccoli and lettuce are high in vitamin K; therefore, they may also impact the effectiveness of warfarin [3, 15].

Should You Eat Spinach If You Use Warfarin?

Here is the brief version of the answer given to the patient:

So if you use warfarin, make sure you eat nearly the same amount of vitamin K each day.

If you want to increase your vitamin K intake, for instance by adding a serving of spinach to your diet, first talk to your doctor!

To accommodate the increased vitamin K in your diet, your doctor may increase your warfarin dose.

In short, if you use an anticoagulant that interacts with vitamin K, work closely with your doctor or dietitian to determine the right amount of vitamin K in your diet.

If you are not taking warfarin, you can indeed consume nutrient-dense and low-calorie spinach as a part of your diet. Spinach won’t give you a clot!

As a matter of fact, spinach may contribute to your health in many ways with its impressive nutrient profile. This is especially true if you follow a vegan or vegetarian diet.

Just make sure you are eating spinach in moderation. Consistently eating excessive amounts of spinach can increase the risk of developing calcium-oxalate kidney stones.

Does Eating Spinach Cause Harmful Blood Clots? Here is the final answer:

For this reason, spinach and other green leafy vegetables that are high in vitamin K are sometimes associated with harmful blood clots.

If you are on warfarin, ask your doctor whether (and if so what quantities) you should consume spinach and other vegetables high in vitamin K.

We use cookies to ensure that we give you the best experience on our website. If you continue to use this site we will assume that you are happy with it.OkNo