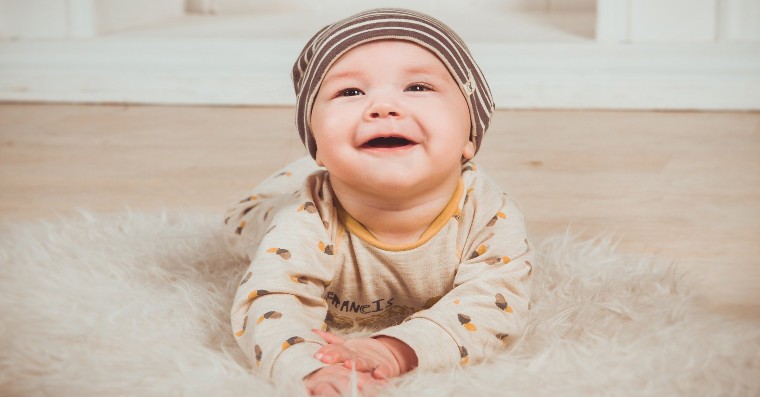 Infant reflux occurs when the stomach contents of a baby move upward into the food pipe or mouth, which can cause regurgitation.

This condition is known as gastroesophageal reflux, shortly GER. It usually happens during or shortly after feeding and is quite common in babies.

It is estimated that about half of all infants spit up many times a day, especially in the first 3 months of their lives [1, 2, 3].

Reflux gets less common as a baby gets older and usually resolves on its own by the time a baby is 18 months old.

Medical professionals indicate that as long as your baby is healthy, happy and growing well, reflux is not a cause for concern [4, 5].

However, sometimes, reflux can bring about some troublesome symptoms and signs in a baby including; frequent vomiting, irritability, arching of the back, refusing to eat and thus poor weight gain [4, 6].

These symptoms may indicate, GERD, gastroesophageal reflux disease, which is a severe and frequent form of GER.

Acid reflux is a common condition affecting numerous people around the world [7, 8, 9].

The condition (acid reflux) occurs when the stomach acid travels up into the esophagus (food pipe).

At the lower end of the esophagus there is a ring-like muscle known as the lower oesophagal sphincter (LES).

LES opens to allow foods or liquid to enter the stomach and then closes again to prevent stomach contents from moving upward.

When LES doesn’t close properly or relaxes when it shouldn’t, the stomach acid can come back up into the esophagus, causing some symptoms such as heartburn or sore throat.

As they have an immature digestive system, babies may have more reflux episodes compared to adults. Nevertheless, unlike adults, acid reflux in babies usually doesn’t cause sore throat or heartburn.

This is because it is unusual for the stomach contents of babies to have enough acid to irritate the throat, says Mayo Clinic.

Although rare, reflux can cause some worrisome symptoms in some babies.

According to the National Institute of Diabetes and Digestive and Kidney Diseases; Infants with GERD may show some of the symptoms below:

Note: If you suspect your little one may have GERD, talk to your baby’s doctor.

Reminder: The LES muscle is a barrier between the esophagus and stomach which keeps stomach contents where they belong.

The following are some potential causes of GER (Gastroesophageal reflux) in babies;

Sometimes, mistakes made by parents can also trigger reflux in infants.

Note: Sometimes infants may experience reflux without bringing up milk or formula. This is called silent reflux [5, 14].

How to Minimise Infant Reflux

The below-given tips may help minimise the frequency as well as the severity of your little one’s reflux.

As mentioned repeatedly, in most cases bringing up some milk or spitting up the formula a couple of times a day is normal for infants, especially for those who are under 1 year old. This is a condition known as baby reflux.

As long as, your baby looks content and happy during and after feeding, there is nothing to worry about.

However, in some cases, reflux (which may contain stomach acid) may irritate your baby’s esophagus and thus cause some symptoms that we mentioned above.

If you notice GERD symptoms in your baby, work closely with your baby’s doctor to soothe his/her symptoms.

Moreover, if your baby still spits up food or liquid after your baby is older than 18 months, see your doctor, the issue might be related to GERD or other medical conditions.

To raise a healthy and happy child, always follow your doctor’s recommendations and stick to the treatment plan your doctor determines.