Almond Milk May Cause Kidney Stones: Here is how… 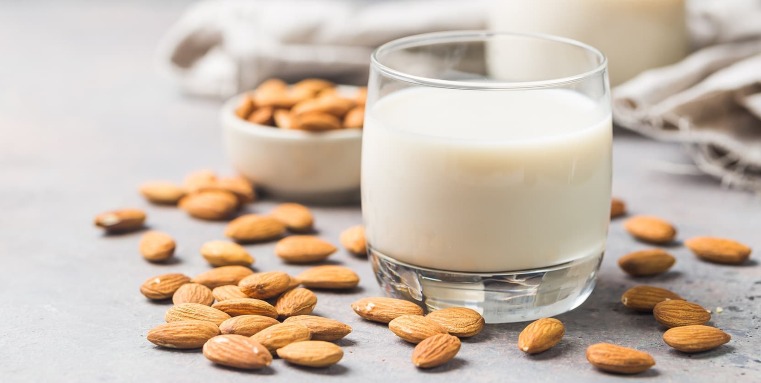 Almond milk appears to be a good alternative for those who wish to avoid dairy milk, such as vegans and people with lactose intolerance.

According to the statistics; almond milk was the most popular plant-based milk in the United States in 2021.

If consumed in excess, however, almond milk can increase the risk of developing kidney stones in susceptible individuals, according to experts…

Why is Almond Milk Linked to Kidney Stones?

Because almond milk contains oxalate, a naturally-occurring compound found in many foods in varying amounts.

Following a high oxalate diet may increase your risk of forming calcium-oxalate kidney stones. This is especially true if you have had this type of stone in the past, or if your body absorbs too much oxalate due to certain reasons {1, 2, 3}.

Almonds are one of the highest sources of oxalate. Besides, some studies suggest that almonds contain higher levels of intestinal soluble oxalate than many other foods {4, 5, 6}.

For these reasons, excessive consumption of almonds is associated with an increased risk of calcium-oxalate stones.

Almond milk tends to contain a high amount of oxalate as it is made from raw almonds.

— Since almond milk (especially homemade) is generally rich in oxalate, those who are prone to kidney stones shouldn’t consume this plant-based milk in excessive amounts, — points out MedicalNewsToday.

Consuming foods or beverages high in oxalate — such as homemade almond milk — can influence the formation of only calcium oxalate stones.

If the urine contains high levels of oxalate and too little liquid, oxalate and calcium can bind together and form calcium oxalate stones.

For this reason, people predisposed to calcium oxalate stones are usually advised to limit the intake of foods high in oxalate and drink plenty of water.

The results showed that almond milk has the highest oxalate concentration. Based on that, the researchers concluded that almond milk, along with cashew milk, has more potential stone risk factors compared to other milk alternatives.

A case study, published in The Journal of Pediatrics, described 3 young children presenting with certain signs and symptoms associated with kidney stones, including blood in the urine and painful urination.

Urine tests showed that all 3 had hyperoxaluria, which refers to too much oxalate in the urine.

What was common for these 3 children was that all of them consumed excessive amounts of almond milk on a regular basis.

After being diagnosed with hyperoxaluria, the parents were told to increase their children’s fluid intake and avoid almond milk consumption, among other dietary suggestions.

All complied with the given dietary guidelines and avoided almond milk products. The result: all symptoms and signs related to kidney stones resolved and didn’t recur after a year of follow-up.

Two of these 3 children had first-degree relatives with kidney stones. Besides, young children tend to drink an inadequate amount of water. According to the researchers, these two factors may have contributed to children’s symptoms in addition to excessive almond milk ingestion.

The researchers indicated that the results obtained in this study provide a strong link between the consumption of almond milk and hyperoxaluria (too much oxalate in the urine), which is a primary risk factor for calcium oxalate kidney stones.

A patient — who seems to think that he/she developed calcium oxalate stones several times due to drinking cow’s milk — asked the Mayo Clinic whether replacing cow’s milk with almond milk is a good idea to prevent kidney stones.

The brief version of the answer given by the Mayo Clinic to the patients is as follows: Although almond milk and other plant milks contain calcium, they also contain oxalate. People who are prone to calcium oxalate stones are cautioned to avoid oxalate-rich foods. Since cow’s milk doesn’t contain oxalate and has the calcium you need, cow’s milk is a good choice for you.

Consuming too much almond milk or other foods high in oxalate when you have one or more of the below-given risk factors can raise your likelihood of developing calcium oxalate stones.

Should You Avoid Almond Milk to Prevent Kidney Stones?

Whether you should consume almond milk — and if so how much — when you are at the risk for calcium oxalate stones should be determined by your doctor or dietitian. However, it may be sensible for you to limit your almond milk intake by the time you will talk to your doctor about it.

Reducing the intake of high oxalate foods may be beneficial for people who are susceptible to calcium oxalate stones, points out the National Kidney Foundation.

Almond milk, especially enriched almond milk, may improve your skin, heart and bone health. This plant-based beverage may even help you sleep better.

However, as we discussed in this article, excessive consumption of almond milk may also increase your risk of forming kidney stones because it is usually high in oxalate.

If you are prone to calcium oxalate kidney stones, consider talking to your doctor regarding your intake of oxalate-rich foods, such as almonds (almond products), spinach and rhubarb.