Since our website contains medical information, it is our utmost responsibility to make sure that our articles are based on scientific evidence, written (or medically reviewed) by subject matter experts. 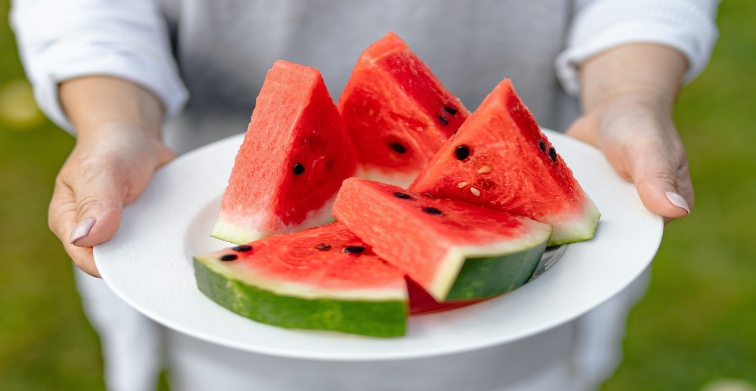 Watermelon (Citrullus lanatus) is a favourite summer fruit for many people with its sweet taste and refreshing effect. The fruit is very rich in nutrients, and approximately 92% of it consists of water.

The red (or pink) colour of watermelon flesh is a sign of its high lycopene levels, which is an important antioxidant. The fruit also contains significant levels of vitamin C, vitamin A and some B vitamins {1, 2}.

In addition to lycopene, watermelon contains many other organic compounds known to help improve cardiovascular health, such as citrulline, arginine, ornithine, and nitrate.

This composition of nutrients makes watermelon a healthy choice for diets.

The high potassium content of juicy watermelon is another reason the fruit is considered good for people with high blood pressure.

What is High Blood Pressure?

High blood pressure is an important public health problem as it can significantly increase the risk for cardiovascular diseases, including heart attack and stroke.

Blood pressure shows the force in the blood vessel walls against the blood flow through the body.

Ideal blood pressure should be less than 120/80 mmHg. If it is higher, there might be a risk for cardiovascular diseases.

Eventually, if these numbers are consistently higher than 140/90 mmHg, it is diagnosed as high blood pressure, also called hypertension {3}.

Citrulline and nitrate are important molecules to improve vascular (blood vessel) health as both of these components of watermelon have a role in the production of nitric oxide, a molecule that plays a critical role in blood pressure regulation. Nitric oxide widens blood vessels and improves blood flow, and thus lowers blood pressure. This in turn reduces the risk of developing hypertension and other cardiovascular diseases {4}.

The question: how do nitrate and citrulline help to produce nitric oxide?

When dietary nitrate molecules are taken into the mouth, the special bacteria turn nitrate into nitrite. Nitrite molecules go directly through the stomach and are used to synthesize nitric oxide {4, 5, 6}.

Research shows that the citrulline content of watermelon depends on environmental salt concentration (osmotic stress). It can be said that citrulline is a kind of defence mechanism for watermelon plants against high salt conditions. This molecule shows a similar effect in the human body too.

What is more, watermelon contains very high levels of lycopene. A 2022 meta-analysis, published in the Journal of Herbal Medicine, demonstrates the beneficial effects of lycopene intake on blood pressure levels.

Last but not least; watermelon contains a significant amount of potassium, 170 mg in 1 cup of diced (152 g) watermelon, according to the U.S Department of Agriculture.

Watermelon and Blood Pressure: What Does The Research Say?

To date, researchers have carried out several studies to evaluate watermelon’s effect on blood pressure. In these studies, several forms of watermelon fruit were used; including the fruit itself, extract, juice, powder, rind and seeds. The results were positive overall, suggesting that watermelon may help lower blood pressure.

Here are some of these studies:

In a 2019 study, 2 cups of fresh watermelon consumption for 4 weeks significantly lowered the blood pressure and also body weight, oxidative stress and feeling of hunger in overweight and obese adults.

A study published in the Journal of Nutrition showed that watermelon juice consumption (500 mL for 2 weeks) increased blood flow in blood vessels and vessel relaxation after meals. Because it is known that acute high blood sugar due to meal consumption may reduce nitric oxide use in the body.

In another study though, watermelon juice intake (360 mL x 2 per day) for 4 weeks did not show a clinical effect on blood pressure, and it was mentioned the blood glucose level was slightly increased in these patients.

In a recent study, healthy people were given the same calorie amount of watermelon seeds, watermelon rind or watermelon flesh (100 kcal), and the blood citrulline levels were investigated.

Based on that it can be said that watermelon seeds are less effective than watermelon flesh when it comes to regulating blood pressure.

The Mayo Clinic mentioned that the DASH diet contains foods naturally low in sodium and high in potassium, calcium and magnesium.

The info given above indicates that eating a healthy diet and doing regular exercise are two effective ways to keep blood pressure in a safe range.

In addition to watermelon; pistachios, pumpkin seeds and pomegranate juice can help lower blood pressure. Below you can read our articles to learn how these healthy foods achieve this.

Sevginur has many publications with dozens of citations as a part of a research team.

She is also a professional health writer. Using her professional knowledge and exceptional research skills, she participated in academic book chapters.

Moreover, Sevginur wrote articles monthly as a columnist for Popular Science Magazine from 2017 to 2019.

To view the studies Sevginur has been involved in, you can click the following links: ResearchGate -- Google Scholar