Is Ginger Good for Acid Reflux? Ginger is a safe herbal agent extensively used for the prevention and treatment of many diseases and symptoms.

Digestive (gastrointestinal) problems are one of the targets of ginger’s health effects. Yes, ginger might be useful against acid reflux, which is one of the most common digestive disorders.

Studies suggest that ginger may lower the number of reflux episodes in certain ways such as by accelerating stomach emptying or regulating the movement of the lower esophageal sphincter.

Besides, ginger’s antioxidant and anti-inflammatory properties may ease reflux-related inflammation.

That said, if you consume ginger in excess, the result can be the total opposite: additional heartburn {1}.

This article explores how ginger may help to ease acid reflux symptoms, and tells you how to use ginger for this purpose.

Acid reflux occurs when stomach acid flows back up into the esophagus. Normally, the lower esophageal sphincter (LES) — the valve-like muscle located between the stomach and the food pipe — prevents stomach acid from moving upward.

However, sometimes LES muscle relaxes when it shouldn’t, or doesn’t fully close after allowing food to enter the stomach. When it happens, stomach acid can back up into the food pipe (esophagus).

The image below illustrates the role of the lower esophageal sphincter muscle (LES). 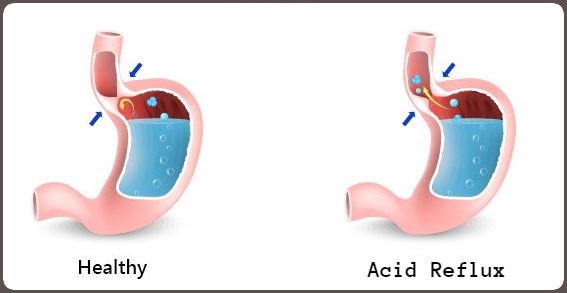 The most common symptom of acid reflux is heartburn, the burning sensation in the chest.

Everyone can get heartburn from time to time and it is quite normal. However, if you experience heartburn or other acid reflux symptoms persistently, you may have gastroesophageal reflux disease (GERD), points out Mayo Clinic.

Recent meta-analysis research published in Nature-Scientific Research showed that the global prevalence of GERD is between 14%-22%. In the same article, the risk factors associated with acid reflux were also investigated. The results showed that obesity (high body mass index) is the main risk factor.

Another meta-analysis study found that people with type 2 diabetes are at the risk of developing acid reflux disease. According to studies, gastric motility (movement of the stomach) problems are another potential cause of acid reflux.

The Effects of Ginger on Acid Reflux and Other Digestive Problems

A comprehensive study published in Nutrients Journal showed the results of 109 different clinical trials about ginger’s effect on human health. This systematic review resulted that ginger has positive effects on the improvement of nausea and vomiting in pregnancy, inflammation, metabolic syndromes, digestive function, and colorectal cancer.

How about ginger’s effect on acid reflux?

Scientific studies suggest that ginger may help with acid reflux both directly and indirectly. Here are the details…

According to the US Food and Drug Administration (FDA), ginger is one of the foods on the “generally regarded as safe (GRAS)” list.

For most people, ginger can be used safely for up to 4 grams per day. It bears repeating excess ginger consumption may even lead to heartburn {1}.

Although it was shown as safe up to 4 grams, studies showed that relatively lower doses of ginger benefit gastrointestinal disorders. Ginger was used at the dosage of 250 mg(0,25 gram) per day in pregnant women to reduce gastrointestinal symptoms {9, 10}.

Even a meta-analysis seems to favour less than the 1,5-gram dosage of ginger.

Ginger can be added to meals or consumed as a tea. 1 teaspoon of powdered ginger is equivalent to about 3 grams. Consumption of half a teaspoon would be the appropriate dose recommended in the literature.

The most effective treatment for acid reflux is lifestyle management.

It is well-known that obesity or high body mass is a strong risk factor for acid reflux. Studies say that losing weight can aid in reducing acid reflux symptoms {11, 12, 13}.

According to the Guideline from the American College of Gastroenterology; some dietary habits are useful for acid reflux prevention;

Also in another study, the abdominal breathing technique was observed to reduce acid reflux symptoms.

To Summarize The Effects of Ginger on Acid Reflux

Sevginur has many publications with dozens of citations as a part of a research team.

She is also a professional health writer. Using her professional knowledge and exceptional research skills, she participated in academic book chapters.

Moreover, Sevginur wrote articles monthly as a columnist for Popular Science Magazine from 2017 to 2019.

To view the studies Sevginur has been involved in, you can click the following links: ResearchGate — Google Scholar