7 Foods That Are High in Vitamin D 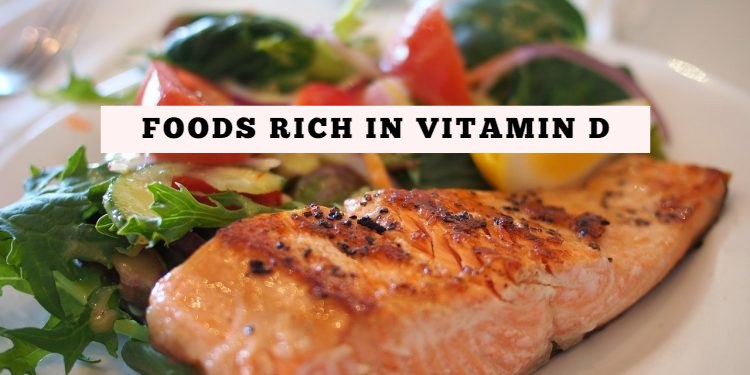 There are various micronutrients (vitamins-minerals) in the human body and each of them plays critical roles individually. Vitamin D is indeed one of these essential micronutrients.

What differs vitamin D from other micronutrients is that vitamin D is the only micronutrient that the human body can produce by itself when the bare skin exposed to the UV light from the sun (1) (2).

According to NHS; sunlight is the main and most important source of vitamin D. This can explain why this vitamin is sometimes called “the sunshine vitamin” (3) (4).

Aside from sunlight, the human body also gets vitamin D from a limited number of food sources. And, in this article, we are going to look at the 7 foods that are high in vitamin D.

It is important to note that although the sun is the primary source of this vitamin, it is estimated that approximately one billion people in the world are vitamin D deficient (5).

This estimated number is actually the reason why the consumption of foods, containing vitamin D, is significant for us.

We can’t always rely on the sun for vitamin D production. Because there are some factors that prevent many of us from producing (sufficient amount of ) this vitamin via the sun, such as (6):

These and similar risk factors remind us of the importance of foods that contain vitamin D. Consuming a sufficient amount of these foods will minimise the risk of developing vitamin D deficiency.

Even though the sun is the main source of vitamin D, the role of foods in terms of providing vitamin D shouldn’t be overlooked especially in the winter months when the majority of people spend long hours indoors and when the days are generally cloudy.

In this section we will investigate the foods that are relatively rich in vitamin D. However, before delving into it, it is important to state the recommended daily vitamin D intake.

According to Mayo Clinic (7); the recommended daily vitamin D intake is :

Here are 7 healthy foods that are high in vitamin D.

If you regularly consume salmon, especially from October to March, that means you are reducing the risk of developing vitamin D deficiency thanks to the high amount of vitamin D available in salmon.

According to the U.S Department of Agriculture; 100 gr farmed (cooked) Atlantic salmon provides 526 IU of vitamin D. That translates into 100 gr of farmed salmon can meet almost 70% of the recommended daily vitamin D needs (8).

However, if salmon is wild-caught, it is going to provide a lot more vitamin D compared to farmed salmon (9).

Essentially, how rich a salmon is in vitamin D depends on many variables. The type of fish, being farm or wild, living environment, raw or cooked are some of these variables that can affect the vitamin D amount in salmon.

In the end, salmon is one of the best sources of vitamin D.

Bear in mind, that salmon also provides other essential nutrients such as healthy protein, vitamin B12 and omega-3 fatty acids.

If you are concerned about developing vitamin D deficiency, especially in the winter months, sardines can help you ease this concern with their high vitamin D content.

According to the U.S Department of Agriculture; 100 gr Atlantic Sardine (canned in oil) provides 193 IU of vitamin D (10).

That brings us to the conclusion that 100 canned sardines can meet roughly 30% of recommended daily vitamin D intake.

Plus, these fish are also a good source of phosphorus, calcium, potassium, vitamin E and omega-3 fatty acids (11). Note that vitamin D increases the absorption of calcium thus supporting bone and teeth health.

You might be worried about the mercury level of sardines. According to WebMD; since sardines consume plankton, they contain very little to no mercury in them (12).

After salmon and sardines, here is another fish namely canned tuna that can provide your body with an excellent amount of vitamin D.

The advantage of these fish is having a taste loved by many people.

In addition to vitamin D; light tuna also offers a handsome amount of selenium and protein.

Note: According to Healthline; as tuna fish is high in mercury, it is best to avoid consuming it every day. Eating no more than 170 gr tuna fish per week is thought to be safe (14) (15).

Even though seafood, in general, is rich in vitamin, it is not the only source. Eggs, which most of us consume regularly, are also a good source of vitamin D.

Yet, it is important to underline vitamin D is available in the yolk. Egg white doesn’t contain this vitamin.

According to the U.S Department of Agriculture; 100 gr egg yolk contains 218 IU of vitamin D.

Moreover, eggs are also rich in vitamin B2, folate, selenium and high-quality protein.

The beef liver may not serve your palate, however, the fact is that beef liver can supply a handsome amount of vitamin D.

Once again, According to the U.S Department of Agriculture; 100 gr of cooked beef liver contains 50 IU of vitamin D, which represents nearly 10% of daily vitamin D requirements (17).

Furthermore, beef liver supplies your body with folate, iron, vitamin B, vitamin A and copper (18).

Despite all, the beef liver may not be a sensible food choice for those who have high cholesterol levels as it contains a significant amount of dietary cholesterol (18).

What makes mushrooms special is the fact that they are the only non-fortified plant sources of vitamin D.

Mushrooms have the ability to synthesise the vitamin thus generating vitamin D2 through the UV rays (19).

Having said that a scientific study suggests that vitamin D3 may be more effective than vitamin D2, which mushrooms can provide, in terms of increasing vitamin D levels in the blood (20).

Because getting natural sunlight, wild mushrooms are quite rich in vitamin D2.

On the other hand, commercially grown mushrooms may also contain a decent amount of D2, if grown by being exposed to UV light (21).

Since the number of foods that contain this essential vitamin is limited and also many of them are not ideal for vegans (beef, fish, eggs), certain foods are fortified in various countries.

In this way, experts and authorities try to combat vitamin D deficiency, which is a common health problem around the world.

In this section, we will look at the foods and drink fortified with vitamin D.

This type of milk can be an ideal source of vitamin D for vegetarians, but the perfect choice for vegans who refuse to consume all animal-origin foods.

Soy milk is fortified with vitamin A, Vitamin D and other certain nutrients (22).

As many people don’t consume milk and other dairy products around the world due to various reasons, experts came up with a new idea which is the fortification of orange juice with vitamin D.

Walter C. Willet from Harvard Health Publishing says” Many Americans don’t get enough vitamin D, so I am happy to see the addition of vitamin D in orange juice.” (24).

According to the U.S Department of Agriculture; 1 cup of (249 g) fortified orange juice contains approximately 100 IU of vitamin D, which equates to almost 15% of RDI (25).