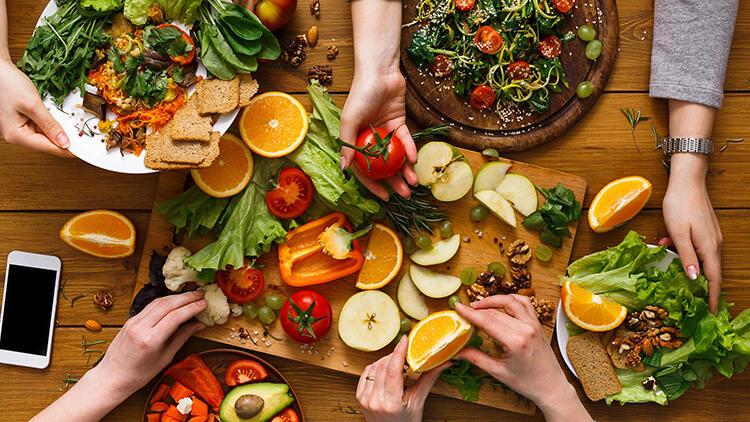 Even though today’s topic is all about a vegan diet and its health benefits, presumably, it would be useful to define briefly ” veganism ” which might be a little different from being vegan.

Unlike many of us might have thought, veganism is not only abstaining from animal sources foods, but it is also a way of life. Let’s allow the Vegan Society to define themselves :

Veganism is a way of living which seeks to exclude, as far as is possible and practicable, all forms of exploitation of, and cruelty to, animals for food, clothing or any other purpose.

Briefly, veganism has a deeper meaning than following only a vegan diet and it truly rejects all animal exploitation forms including dog or horse racing or a jacket made from animal skin.

It wouldn’t be an exaggeration to say that going vegan has been one of the biggest trends in the world. What stats say is that; approximately 8 per cent of the world population follows a vegan or vegetarian-based diet.

People from different parts of the world prefer a vegan diet due to various reasons. The aim for some is protecting the environment, for others is having a healthy life with the aid of a vegan diet.

It bears repeating; that vegans do not eat any foods that come from animals including eggs and dairy products. Furthermore, some vegans don’t add even honey to their diet.

Speaking of what is eaten and what is not, it would be relevant to indicate the main difference between vegetarian and vegan diets. Vegetarians may eat animal source foods apart from meat and fish whereas vegans never eat animal products including eggs, dairy and honey ( honey might be an exception ).

Well, there are indeed science-backed disadvantageous of a vegan diet, for instance, vitamin deficiency. You can also read the Potential risks of a Vegan Diet.

For now, let’s focus solely on the pros of eating vegan…

The Health Benefits of Eating Vegan

In spite of the fact that some people stick to a vegan diet due to environmental or ethical concerns, for some; eating vegan is about having a better body shape or lower body mass.

Whatever the reason, there are multiple scientific studies that demonstrate the positive correlation between a plant-based diet and weight loss.

One of these specific studies suggests that; choosing a plant-based diet is effective in weight loss. Once again in the same study, it is also highlighted that a vegan diet might be an effective tool to avoid as well as treat obesity.

Based on a study; a plant-based ( vegan ) diet might be the best way to keep type-2 diabetes at bay thereby avoiding kidney problems as well as reducing cardiovascular diseases.

Let’s not forget; heart diseases are the world’s biggest killers. Therefore, we need to find the best ways to protect our heart health. As mentioned just above, a vegan diet has been proven to be ideal for the human heart.

A vegan diet is heavily associated with a lower risk of heart problems since this type of diet mainly consists of fruits, vegetables ( both of which are high in fibre), vitamins, minerals, whole grains, nuts and seeds.

Moreover, a scientific study from Northwestern Medicine and Cornell University reveals that; regular consumption of processed meat poses a 7 per cent higher risk of heart diseases.

Although there is no proof as to whether a specific vegan diet completely prevents cancer, there are a great number of scientific studies indicating a plant-based diet significantly reduces the risk of developing cancer.

Related to this, there is a supportive survey in which a group of research specialists asked 70,000 people about their diets and followed these participants for an extended period of time. Afterwards, the researchers came to the conclusion that cancer rates were rather low among those who had a plant-based ( vegan ) diet.

Additionally, it is well-known that consuming too much-processed meat such as; sausages, hot dogs, and salami; increases, particularly, the risk of colon and oesophagal cancer. As such, the meat-free vegan diet becomes a protective measure against these cancer types.

What’s more, plant-based foods consumed mainly by vegetarians and vegans provide phytochemicals to the human body. These chemical compounds are especially needed by the immune system to withstand diseases including cancer.

Headaches may occur due to various reasons and almost everyone experiences headaches at some point. Specifically, a migraine is a type of headache that emerges with throbbing pain. What differentiates migraine from other types of headaches is being the most relentless headache type.

The good news is that those who follow a plant-based diet may be able to better cope with migraine attacks according to a study. On the other hand, experts are emphasising that there are some foods that may trigger migraine in a vegan diet too.

Therefore, in order for a vegan diet brings positive results in terms of preventing headaches ( migraine ) these migraine-causing foods in the vegan diet should be eliminated.

So far, we have talked about the health benefits of a vegan type diet. But, how about beauty? Doesn’t a vegan diet make you more appealing by providing seamless skin? It might be …

A vegan diet can contribute to skin health in two ways. Firstly, as we all know a vegan diet requires eating fruits and vegetables. The consumption of these foods may provide seamless skin, considering the fact that most fruits and vegetables are packed with many vitamins, minerals and natural antioxidants all of which are necessary for skin health.

Secondly, eating vegan is associated with more energy during the day. The reason for that is the light foods that a vegan would eat are easy to digest. Whilst digesting heavy foods such as meat, the body spends great effort, hence, you feel tired.

Being energetic during the day means being happy most of the time. The happier you are the better sleep you get. Finally, everyone knows a good night’s sleep is indispensable for skin health.