7 Ways to Get Rid of a Stuffy Nose

You already know how annoying is dealing with a stuffy nose that compels you to carry a bunch of handkerchiefs wherever you go until you start breathing properly again. How about your voice when your nose is clogged? What about the hindered breathing that ruins the quality of your sleep at night?

Most of the time a stuffy nose is not an indication of a serious medical condition. However, it can definitely make you tired of living for a specific period of time.

When a congested nose occurs nearly everyone looks for methods that could bring some comfort. Some inhale steam while others consume green tea to get rid of a stuffy nose. For sure, there are also other ways that people use to combat a stuffy nose.

But, the first questions to ask should be what causes a stuffy nose? Because knowing the cause/s is the first and most important step to solving the problem itself.

According to Mayo Clinic; anything that irritates or inflames the nasal tissues can lead to nasal congestion “stuffy nose”. Although, there are many causes of nasal congestion; the Mayo Clinic notes that infections – like colds, flu, sinusitis – and allergies are the most frequent causes (1).

It appears that there are various causes of nasal congestion (stuffy nose), although we indicated only the most common causes.

So, how about the ways to get rid of a stuffy nose? Can methods –mentioned above – like inhaling steam or drinking green tea actually work?

Well, in the rest of the article we are going to explore the 7 most effective ways to clear a stuffy nose. Keep reading to learn the methods that may help you combat a stuffy nose effectively.

Medical experts warn: if nasal congestion hasn’t gone away within two weeks, it is best to talk to a doctor (2),(3). 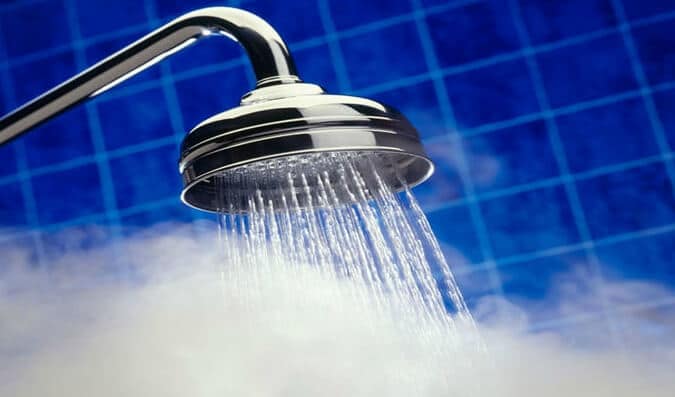 In your experience, you must already know that taking a hot shower while dealing with a stuffy nose is quite an effective way to breathe again.

The thing that makes a hot shower an effective way to relieve a congested nose is the steam you breathe while showering. The steam helps loosen the mucus in your nose and throat and relieve inflammation, thus providing relief (4),(5).

Although taking a hot shower can really help you unclogged your nose, being a temporary solution is the downside of this method. After a while, your nose will most likely get clogged again. 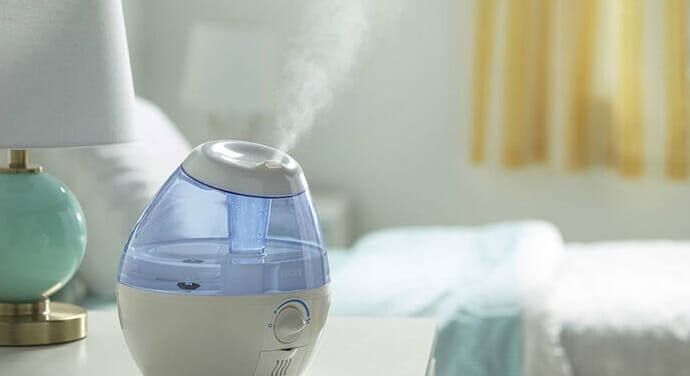 Having an ideal relative humidity level at your home offers various health benefits ranging from relief for dry eyes to reduced risk of snoring.

How about the impact of using a humidifier on nasal congestion? Can it bring some comfort and relieve the symptoms?

According to sinusitis experts; having enough humidity indoor helps ease nasal congestion and also aid to expel mucus in the nasal passages. (6),(7). By the way, the ideal indoor humidity should be between 30% and 50%, according to the Mayo Clinic (6).

The best method to humidify the home is to use a humidifier that heats the water and produces steam. Alternatively, you can put a bowl of water on the heater or central heating in the winter months to add humidity to your home.

Conclusion: having the ideal amount of indoor humidity can help you combat a stuffy nose more effectively.

Many of us are aware of the fact that drinking a sufficient amount of water during the day is essential for maintaining bodily functions.

In addition to contributing to your overall health, staying hydrated can also help you deal with a stuffy nose regardless of whether you are drinking water ( the most recommended one) natural juice or even having a warm soup.

So, in what way drinking water or other health drinks help you combat a stuffy nose more effectively? The answer is by thinning the mucus in the nasal passage and by reducing the pressure in the sinuses, according to Healthline (8).

Keep your nasal passage moisturised by drinking enough water when dealing with a stuffy nose.

Staying hydrated is always a good idea regardless of whether you suffer from a congested nose. That being said, drinking water or other liquids excessively cause harm rather than improving your health.

In the last two sections, we have highlighted the importance of hydration and humidity for overcoming a stuffy nose. Basically, these two factors help ease nasal congestion.

As an alternative to using a humidifier or drinking liquid both of which help ease nasal congestion, you can also use saline sprays to decongest the nasal passage by softening and thinning mucus. Saline sprays will decrease the inflammation in the nose, thereby, helping to relieve the congestion (9),(10).

Even though saline sprays are an effective way to relieve a congested nose, we encourage you to speak to your pharmacist or physician about the precautions and uses of these sprays. 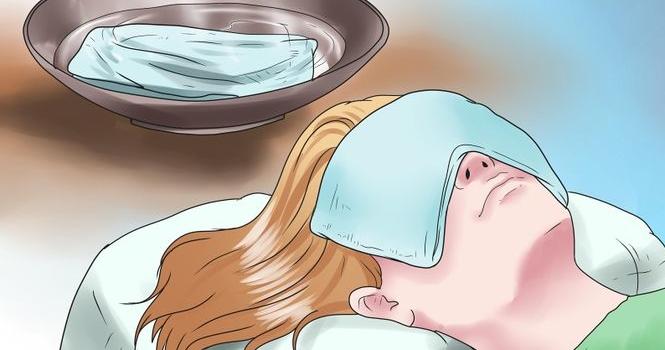 Applying a warm compress can contribute to your breathing by moisturising the air around the nose. Even though this practice is partly traditional, it is still considered an effective way to relieve a stuffy nose. To apply it; all you need are a towel and warm water.

Soak the towel in warm water and then squeeze it so that excess water wouldn’t drip on your face. Thereafter, place this wet towel ( or cloth ) over your nose and forehead, as is seen in the image.  Keep the warm compress on your nose for about 15 minutes. Refresh the compress as often as necessary.

This practice may help the nasal passage remain open, thus providing some relief.

6- Raise Your Head While Sleeping

The treatment of nasal congestion aims at keeping the nasal passages open. When the mucus stays too long in the nasal passage and blood vessels get inflamed, breathing through nostrils become almost impossible.

Consider raising your head during sleep with an extra pillow in times of suffering from nasal congestion to get a good night’s sleep.

As mentioned at the beginning of the article, while dealing with a stuffy nose napkins become our best friends. And, as we all know blowing a stuffy nose with the aim of opening the passage is almost an irresistible urge.

However, what medical experts say is that constant blowing can be a big mistake that prolongs the healing process. Because constant nose-blowing can exert excessive pressure on the nasal tissues and worsen the already inflamed blood vessels as a result (11),(12).

The best thing to do is blowing the nose when it is actually running. In doing so, you will prevent your condition from getting worse.